‘Mum and I didn’t think I’d get a job straight away after school so I decided to see if Springwood NOVA Transition could help me prepare. It certainly did!’ said Harry. The two-year program helped him:

Towards the end of the program, Harry was confident he could get a job.Harry found Transition staff were generous and friendly. They really cared about him and finding a job that suited his skills and interests.

NOVA first met Harry at a job preparation workshop at Blaxland High School where he was completing year 12. They recognised that his jovial nature suited his goal to find a job in a cafe or retail. He wanted to work with people. 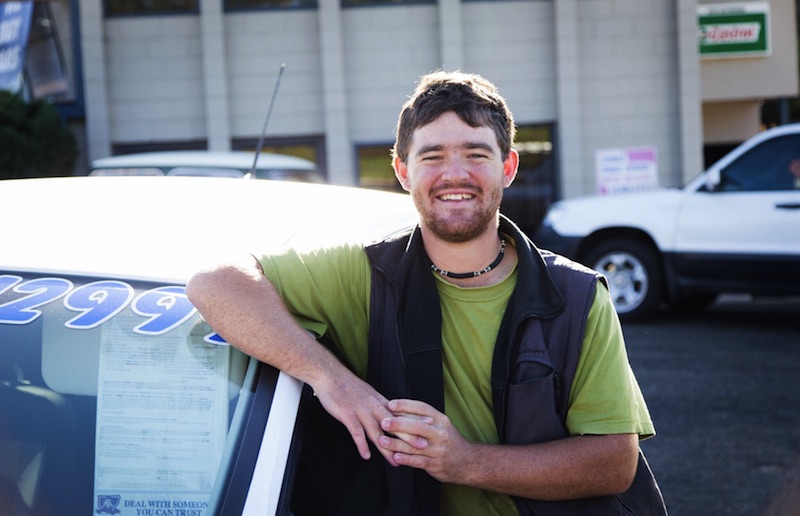 Starting at NOVA Transition Springwood in 2012, Harry progressed quickly with his great communication skills, maturity and good manners. His work experience placements included Michel’s Patisserie, and Track and Trails. He also completed a barista course. His help with organising and speaking at one of Springwood’s Open Days was greatly appreciated by NOVA staff.

Harry started working at Skinners Hardware in Lawson in March 2013. Through support from his NOVA Employment Consultant and Job Coach, he caught the train independently to and from work. Now he lives independently and prepares his own meals.

In 2015, Harry changed jobs to work in a car yard cleaning the cars. He loves being outside in the fresh air. And he’s heading for the record of the number of cars cleaned in one day! On any given day, Harry is tired but feels rewarded for his efforts. His boss must be happy because his hours are increasing all the time. Harry enjoys this work because it gives him a reason to get up in the morning.

The best parts of NOVA Transition for Harry were: