Nick - Slipping smoothly into the workforce

To begin with, Nick was reluctant to come to NOVA Transition after finishing at Kogarah High School. But, with encouragement, he came – and he’s glad he did: by the end of his first year, he was ready to start looking for a job.

A work experience position on the loading dock at Big W Rockdale turned into paid casual employment in 2015. Then, in 2016, Nick started work as a yard hand and car detailer at Stewart Toyota, Rockdale.

Nick prides himself in his attention to detail when cleaning cars, as well as being able to work in a fast-paced environment, and under pressure. He moves cars around the workshop, cleans and maintains the storage rooms and liaises with his supervisors, managers and the mechanics.

Stewart Toyota Service Manager, Chris, says that Nick has been a great addition to their dedicated team. ‘He’s always ready to respond to his duties, and has always tried his hardest to complete them diligently. Having him here is raising the bar on our operations to the benefit of our customers.’ 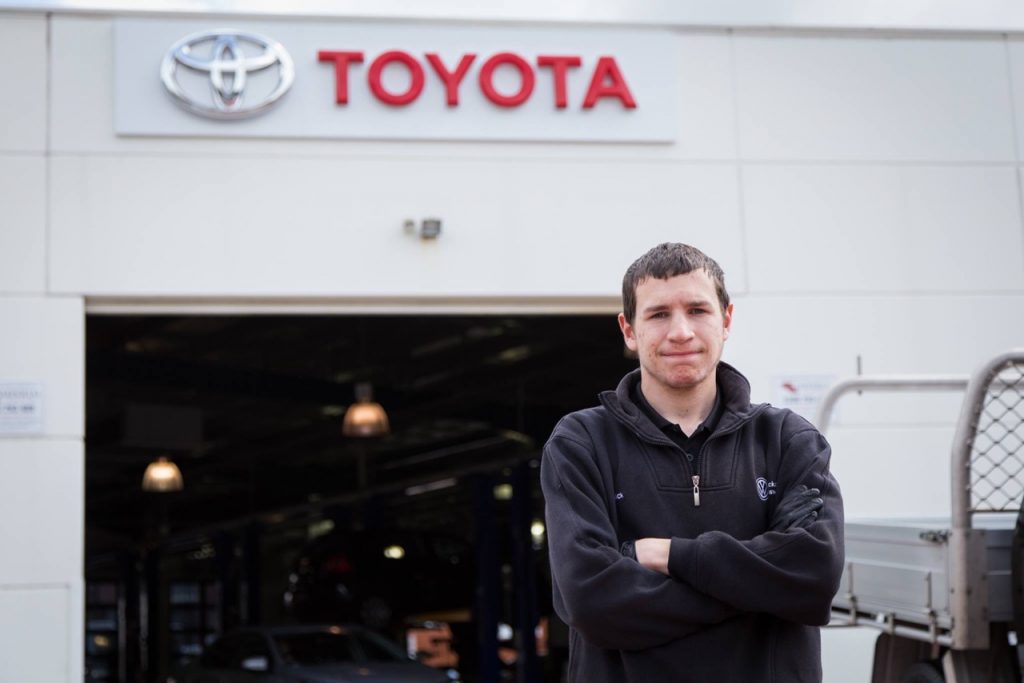 Chris has found Nick easy to communicate with, and noticed that Nick’s needs fit in with Stewart Toyota’s best practices. ‘He’s slipped right into our workforce extremely smoothly.’

Stewart Toyota went to NOVA to fill a niche. ‘Trying to find qualified staff was difficult and the NOVA team have been able to stand up to the requirements admirably,’ says Chris. ‘I would highly recommend NOVA to other employers. Whilst with any recruitment there can be a process of trial and error, once you find the right people it proves to be profitable to all concerned.’

Nick has weekly appointments with his Job Coach, who also supported him at Toyota until he was confident enough to do the role with less support. NOVA is now helping Nick to progress his career further. Having worked in a couple of different industries, Nick is keen to move into warehousing and logistics, an area he feels would be a good long-term career for him. NOVA has supported him to get his forklift licence, and Nick is searching daily (around his current work hours) for his dream role.

In the meantime, Nick is so enthusiastic about NOVA Transition that he’s heading back to Kogarah High School to  encourage other students to try NOVA. This was Nick’s own initiative – he wants to be an example to others, and asked if he could speak about achieving his career goals.