At NOVA Transition, we research industries and learn about different job types experientially – by seeing and feeling what it’s like. We learn through exploring in fun, engaging way. So when Liverpool Transition trainees were presented with an opportunity to tour ABC Studios and Media Production they jumped at the opportunity.

The day was planned from beginning to end (all part of our learning here in Liverpool). We read the tour rules, found out how to get there and mapped out our way to Ultimo. We even appointed our cameraman for the day: Jordan, one of our trainees who is keen to explore photography and social media as one of his job choices. 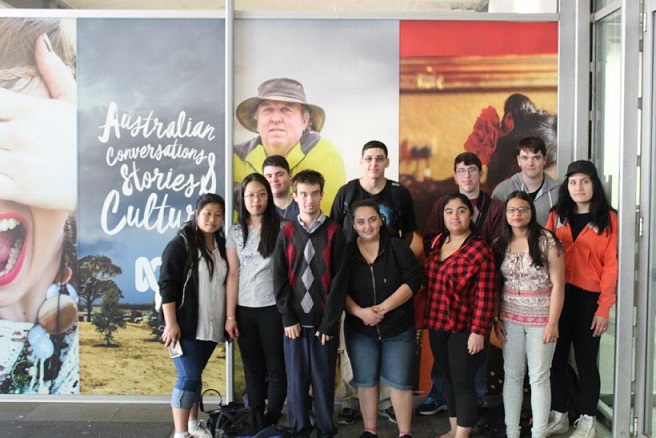 When we arrived we met tour guides Colin and Juliet and found out their role is not paid. They had been volunteering for over 10 years, and were very knowledgeable. We learnt that ABC Studios have just over 2000 staff and five studios. The Studios first opened in 1959 and one of the biggest events that took place was the introduction of colour television in 1979.

Before entering the back-stage area, we had to lock away our bags and wear a sticker as part of the security procedures. Our first stop was the control room. Although it wasn’t operating at the time, the guide explained all the screens and buttons to us, and who sits where. We were amazed at how many different roles sat in this one room: about seven, including Director, Producer and Audio Cue Operators.

We were lucky to see the makings of a live set from the Gruen series, and how a team of people move the set in and out of the studio. Studios of different sizes are used to produce different kinds of programs, including current affairs programs and those that don’t have a live audience. We also visited a radio studio where we watched a live broadcast. In the hair, makeup and special effects rooms, we saw some stars being ‘made-up’ and learnt that it takes about an hour, on average, to make a woman ‘set-ready’ and 20 minutes for a man.

At the end of the day our Job Coaches got us to write a sentence about what we enjoyed and learnt from our industry visit:

“It was interesting stepping into a studio for the first time.  I felt like I was about to star in a show and my parents were going to see me on TV”

“My favourite part was seeing past special effects photos and seeing the masks and wigs”.